Way back in 1275, Edward I had granted a royal charter to hold fairs alongside the mere which became known as Fair Place.
For centuries it has been used for the sale of livestock which in those days was a very important social occasion.
Importantly the enclosure act of 1809 secured two acres at Fair Place ‘as a pasture and watering place and for the use as a fair ground for the sale of beast’.
Fair Place was registered as a village green in 1968 and is now owned by Hornsea Town Council.
People have had access to the mere for 800 years in this location.
It is still there, tucked away behind Westgate but had become overgrown.
Hornsea Civic Society has made the mere accessible once more from Fair Place.
We don’t expect people to water their beasts there but perhaps potter or picnic near the mere once again.

Hornsea Civic Society was chosen to receive a  grant of £8,000 from the Tesco “Bags of Help” Grant Scheme to clear the site, install a fence to protect children and provide seating and picnic benches.

The new picnic area was officially opened on 6th August 2017 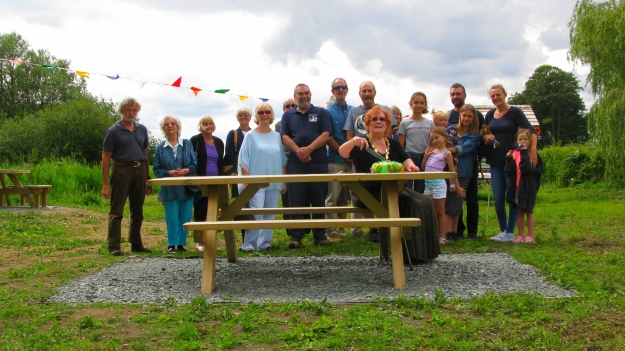